Seven Deadly Sins in the US and Plastic Surgery

What the seven sins tell us about plastic surgery

One of my particular interests is the point where theology, psychology and health meet cosmetic plastic surgery. I have written about the seven deadly sins in the past;

The sin of plastic surgery?

Why America is fat?

Here is a map someone forwarded to me from Deadly Panda, which seems to produce some rather interesting maps.

The map shows the distribution of the seven deadly sins across the United States. Areas in red are “devilish,” those in green “saintly.” 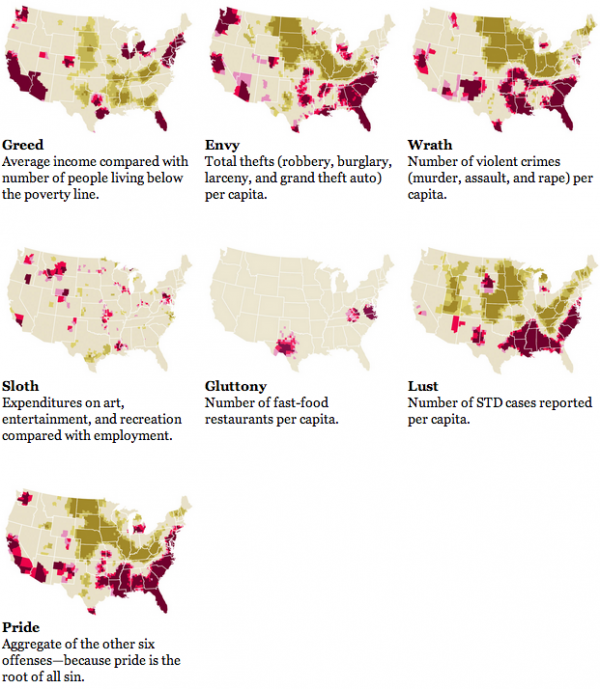 Greatest in the big cities. From Boston and New York to D.C., Los Angeles and Chicago to Seattle. Not too surprising. They did not examine the greed that some plastic surgery patients exhibit with too many plastic surgery procedures, too much Botox and too many fillers. Some women from these cities can be considered greedy when it comes to plastic surgery.

Overall, the rate of theft appears to be greatest in the South. Envy of others’ beauty, breast size or abdominal six pack was not measured.

Murder rates are greatest in the South, New Mexico, Louisiana and Northern California . . . those boys at the bayou must not be so easygoing after all.

Expenditure on “unnecessary” things is greatest in the Dakotas and Montana. This shows that expenditure on plastic surgery was not considered a sin by the producers of this map, as cosmetic surgery rates in these states are rather low.

The southern and eastern seaboards seem to have a preoccupation with sex. At least, that’s what the distribution of sexually transmitted disease cases seems to imply. Of course, it may be that the rest of the country is equally obsessed but simply has better doctors!

The larger average breast implant size in the South may have something to do with this phenomenon.

As the aggregate of the other sins, pride seems to be greatest across the south of the country. Consider, though, that it may be pride in their beautiful bodies!

Now that was interesting, wasn’t it?