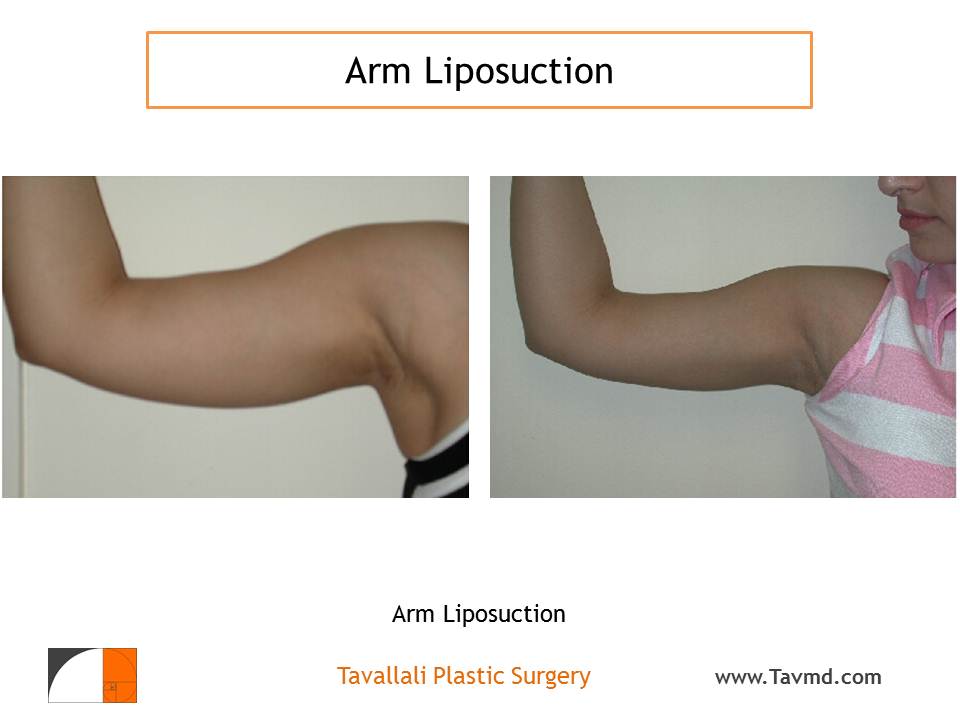 Liposuction of the Arms

Liposuction of the Arms

Some people are born with fat arms, some get them with time and almost everyone ends up with some arm laxity and a little wobble sooner or later. The distribution of fat in the arms is, like all other fat distribution, determined by genetics. We are programmed from birth to store fat at different times in our lives and in different areas. Typically, the primary storage areas are the thighs and the abdomen. Fat storage in the arms is usually a secondary storage area but one that has much more cosmetic visibility than other areas. Requests from patients for cosmetic plastic surgeons to reduce the fat are quite common.

Where is the fat in the arms?

Arm fat is distributed around the whole circumference of the arms but usually is more pronounced in the triceps area (the back of the arms). The area over the deltoids (back of the shoulder) also seems able to hold a good amount of fat. In contrast, even though there may be a little fat below the elbow, that is not an area I have ever liposuctioned.

How is the fat removed?

Liposuction is the best method to remove fat from the arms. I usually perform the lipo in the office under local anesthesia. One 5 mm incision is made at the elbow and another in the armpit to allow placement of local tumescent anesthesia. Liposuction is then performed using small cannulae of 2mm and 3mm diameter, taking out fat in little “cylinders.” The skin becomes loose by the end of the surgery as fat is removed.
After surgery, arms are wrapped for a day or two, and I tell my cosmetic patients to sleep with their hands elevated to reduce swelling. All bracelets and rings must be taken off  prior to surgery and not put back on for several days until the swelling is gone.

I allow my patients to remove their dressings and place themselves in a T-shirt with long sleeves. The idea is to have just a little support to lower the discomfort from swelling. Exercise can be started in two weeks, and patients are encouraged to stretch the arms and massage them regularly until they feel fine again—sometimes after about 2-3 months after the surgery! Liposuction provides a relatively quick, efficient and effective treatment for fat arms. Patients can once again enjoy wearing short-sleeved shirts and dresses and not have to worry about hiding their arms.
Morad Tavallali, M.D., FACS