Unless you are a NASA astronaut perpetually assigned to space, the effects of earth’s gravity will cause drooping of your skin with time. The breasts, which are mainly composed of fat, will also droop. The operation to bring the breasts back to a more youthful shape and position is a breast lift, or mastopexy.

The breast lift technique used by a majority (85%) of board-certified plastic surgeons in the US is one that is 50 years old. The so-called “wise pattern” technique leaves the patient with an anchor pattern scar: a scar around the areola, a vertical scar toward the bra line (infra-mammary line) and a horrible long scar horizontally along the bra line from almost the chest bone to the arm pit. This horizontal scar is repeated on the other side, and essentially the patient looks like they have been cut in half! I have always hated it. This is the “anchor” scar.

The concept of this plastic surgery is to hold the mammary tissues up in a new and more youthful position by tightening the skin.  The extra skin is cut out, and this is what results in the large scars. Unfortunately, despite a superb-looking breast shape in the early months post-surgery, the skin does the only thing it can do under tension—it stretches and the breast shape changes to a flat, “boxy” shape. 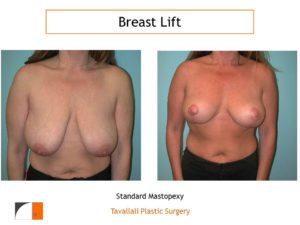 In the early 1990s, Dr. Lejour, a professor of plastic surgery and chief at the University Hospital in Brussels, Belgium, described a new technique for breast lifts and reductions. This is the “new” technique for plastic surgeons in the US, though only 15% have bothered to learn how to do it (surgeons tend to be difficult people to retrain once they have learned a specific way of doing a procedure).

Her idea was revolutionary in that it was not based on skin tightening so much as reconstructing the breast shape into  a rounder, firmer breast. Scars are around the areola and vertically toward the bra line. There is NO large horizontal scar underneath. This technique also makes use of the skin’s intrinsic ability to contract, and though the final result takes longer to achieve, sometimes up to four months after surgery, the resulting shape remains long-term. The resulting scars are often called “lollipop scars.”

No matter which technique is used, some basic characteristics are the same, given that the aim of the surgery is the same:

1. Elevation of the nipple to a point 21 cm from the sternal notch-bone under the neck
2. Removal of extra skin in central portion of the breast
3. Preservation of all breast tissue (unless doing a breast reduction)

Most patients return to work in 3-4 days given that there is little pain associated with this surgery. Final results can take about four months and up to two years before the scars become imperceptible.

Of course, with time, the breasts will start to sag again, but I typically tell my patients that this is a once in a lifetime surgery. I have yet to repeat it on one of my patients, though I have redone them on patients previously operated on with the wise pattern technique done by other surgeons.