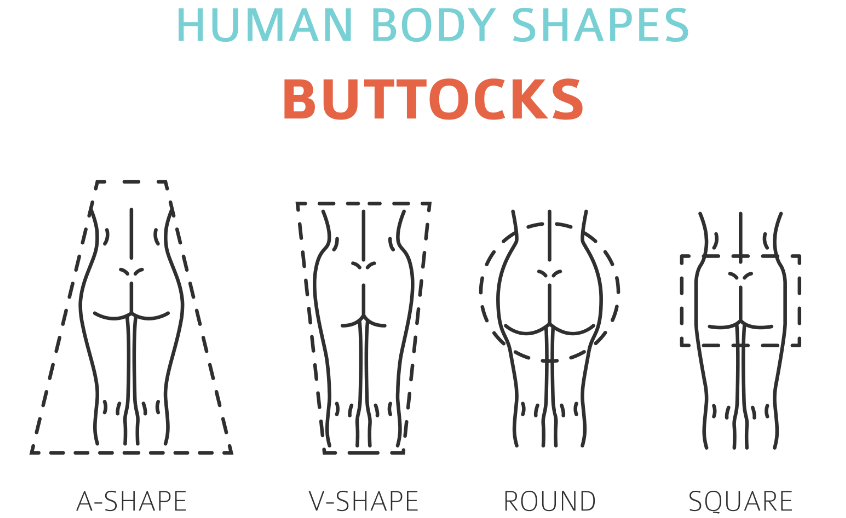 I recently saw a classification for buttock shapes. It turns out there are pear, apple, mandarin and tomato buttock shapes.  Funny but no one told me that during my training. It also appears that the citrus fruit among these, mandarin, is the shape most aspire to: two round balls for buttocks. Buttocks plastic surgery keeps on evolving!

From a cosmetic plastic surgeon’s perspective, there are three types of buttocks plastic surgery that can be performed: patients want their buttocks larger, smaller or just lifted.

The options for making buttocks larger are:

In this outpatient cosmetic procedure, a 2-3 inch incision is made between the buttock cheeks and a solid silicone implant is placed under the buttock (gluteus) muscles.

There is really only one cosmetic procedure to make buttocks smaller, and that is liposuction. In this procedure, three to four small incisions are made around either cheek and fat is removed, leaving behind a smaller buttock. The cosmetic danger is in removing too much fat and turning a plump cheek into a flat and droopy one—not a good idea.

There are two options for this cosmetic procedure, buttock lift surgery and, again, Brazilian buttock lift.

In this surgery, a scar is placed in a crease under the cheeks and the skin is turned in to give a modest lift.

The problem is that the plastic surgeon is trying to push and hold your skin and fat tissues in a high position against gravity’s force; given the weight of skin and fat, gravity wins. The scars are not great from this surgery, and I try hard not to perform it!

Brazilian buttock lift
As above, fat injection will not only make a buttock larger but will also lift it, in the same way an empty bag is “lifted“ when full. With liposuction I can actually change the shape of the buttocks to to make them larger and lifted or smaller and lifted!

The concept to keep in mind with all these surgeries is that by changing the shape of the skin and fat around an area I can change the apparent shape of the area itself!

I first wrote this blog in 2010. 4 years later not much has changed other than…

I now perform a lot more Brazilian buttock lifts than before; it is a routine procedure now.

I do very few silicone implants these days

I have not done a simple lift with cutting of the skin in 4 years! – It is just not a good surgery.

We still do not know how come much fat cells survive in some areas and not in others as well!