A recent news article from Spain about breast implants being used to transport drugs caught my attention. A passenger from Latin America arriving in Madrid was searched, and bloody bandages were found next to incisions in her breasts. Customs officials became suspicious. An X-ray showed “breast implants” that were found to contain about $80,000 worth of cocaine!
Here is a photo of her “breast implants.” 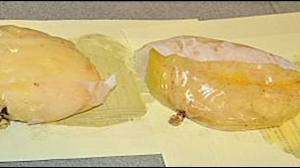 This story made me think of a number of different issues:

What type of doctor would do the surgery?
What type of breast implant was used?
Where else on the body do drug dealers hide drugs?
What are some adverse effects of transporting drugs inside the body?

Someone obviously placed these plastic bags (breast implants) filled with cocaine under this poor girl’s breasts. I doubt it was a board-certified cosmetic plastic surgeon.

Most of these “drug mules” (people carrying drugs) come from South America. Interestingly, few countries in South America have standard residency training programs in plastic surgery. Many plastic surgeons in South America learn techniques not through a formal training program but rather as an apprentice—if they have any training at all. With a lack of governing bodies for board certification, any doctor can call themselves a plastic surgeon. Many just perform cosmetic surgery procedures with no training at all. (Unfortunately, many in the US do this also!) Consequences are obviously not good for the “patients.”

As the photo shows drugs, were being transported in plastic bags that were placed in tissues under the breasts. As such, they were not real breast implants. Theoretically, cocaine could be diluted with the saline used to fill the implants, but I doubt a drug lord would go to the trouble of getting real, sterile breast implants for the lower amount of drugs that could be transported in solution.

This case was interesting to me because of the novel use of breast implants to carry drugs. Usually, drugs are hidden in body cavities, though the risk of death are much greater for “mules.” Typically, drugs are placed in a double layer of condoms, which are either swallowed or placed through the anus into the colon. The drugs are recovered after the mule has a bowel movement.

In a particularly macabre case a few years ago, drug traffickers filled the bodies of dead tourists being repatriated to the US with drugs!

Complications from transporting drugs in the body

Often, severe and deadly complications occur from transporting drugs in the body or in implants. These include:

Despite the significant risks, transporting drugs using plastic surgery techniques is on the rise. The profits drug lords make are so enormous and the risks of being caught or convicted so small that the death or capture of a “mule” here and there is considered inconsequential.