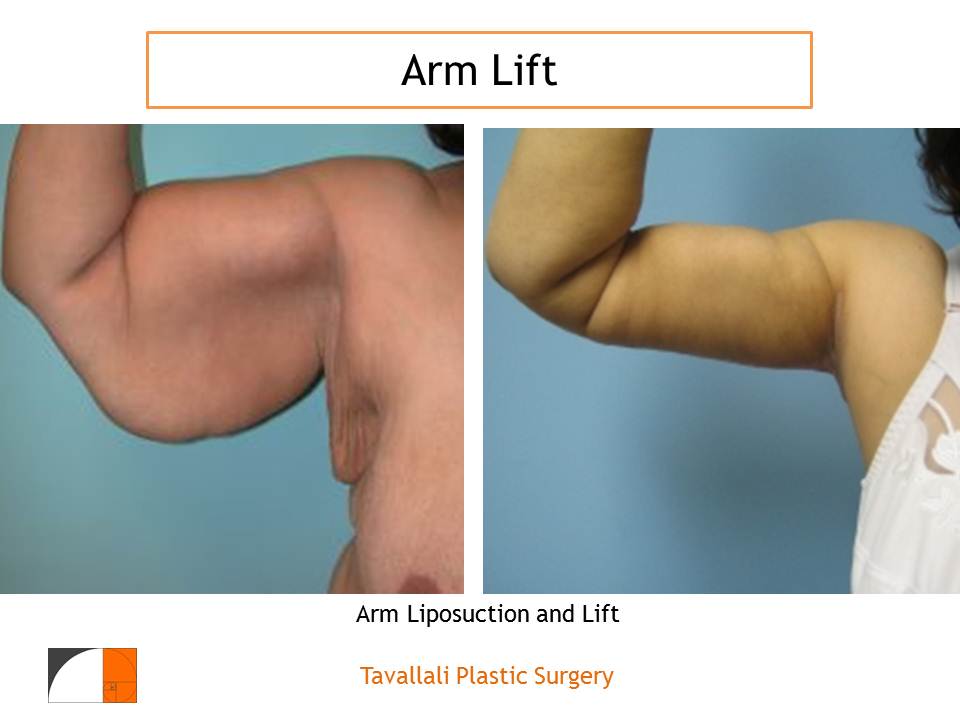 Traditional arm lifts have included a vertical scar that goes from the elbow directly to the armpit. This unsightly scar makes the arm smaller and removes the “bat wings” of extra skin hanging down, but the cost is, in my opinion, too great. All too often, plastic surgeons perform cosmetic surgery without really thinking about what the patient wants. In the case of arm lifts, the cosmetic patient wants a plastic surgery that will allow him or her to wear a short-sleeved shirt. They do not necessarily want smaller arms; OK, they do, but only to be able to wear the shirt they want. As such, an arm lift surgery that leaves a long scar behind the arm will lead to the patient NOT baring their arms—the whole point of the surgery is lost. It’s the same for vertical scars in a tummy tuck or in a thigh lift: skin is removed in these cosmetic procedures, but the plastic surgeon is not really doing the patient a favor.

The technique I use for an arm lift is a liposuction of the arm to remove any extra fat that is remaining after the weight loss followed by a skin excision in the armpit. The horizontal scar under the arm is well hidden and allows the patient to bare their arms. Look at the junction of your shirt’s body and sleeve; the scar goes in the same position on your body. It is true that maybe a little less skin can be removed in this technique, but the result is well worth it. I sometimes combine a lipo of the skin of the sides and pull that skin up also. The surgery takes about two hours and is performed on an outpatient basis. The patient has to be a little careful in lifting their arms for a few days, but they are up and at it in a couple of days. Full healing can take a month or so. This is the way an arm lift should be done. The vertical scar technique should be banned.