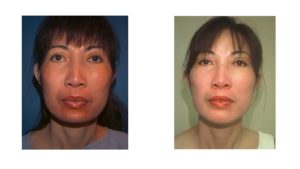 It is perhaps a little-known fact outside of plastic surgeons who perform cosmetic surgery that as we are evolving as a species, our jaws are getting smaller. In fact, we may all end up like the old 1920 cartoon character Andy Gump, who had no jaw at all (the character was based on a real WW1 veteran who lost his jaw in combat!).

But before we get to that stage, we will have to live with our small jaws and mentums and seek a consultation with a board-certified plastic surgeon for ways to improve our facial harmony by chin augmentation or mentoplasty.

In the ideal facial proportions, the face can be divided into three areas: from the hairline of the forehead to bridge of the nose, from there to the bottom of the nose and from there to the bottom of the chin. This “rule of thirds” was actually devised by Leonardo da Vinci and represents the ideal facial proportions when the three areas are the same length.
Many people have a “weak chin” when you measure them using these criteria and look better when the vertical length of the chin is enlarged by placing a chin implant or moving the jaw using orthognathic surgery.

There are a number of reasons why you may look like you have a weak chin:

As described above. The Hapsburg royal family that ruled Europe for hundreds of years actually had enlarged chins.

With age, the bone of the jaw and chin resorbs and the chin becomes smaller. Look at a baby’s chin and that of an elderly person and see how they are similar in shape. In one case, the chin has not grown, and in the other, it has resorbed.

A large nose will give the appearance of a small chin just by the facial relationships they have. 15% of patients undergoing a rhinoplasty, or nose surgery, will require a chin implant for best results.

4. Growth of the chin

The child’s facial skeleton does not mature until ages 16 to 18 in women and 18 to 21 in males. Sometime during puberty the nose starts to grow larger, and it takes a few years for the growth of the jaw and chin to catch up; that explains those “ugly” years most of us go through. When the mentum does grow, the face falls back into a better, more pleasing relationship of its elements.

There are three current methods for enlarging the chin:

This is the latest technique and involves modest enlargement of the chin by injection of materials such as Radiesse. The hylauronic acid gives a temporary 2-year result, but the injection is simple, fast and reasonably effective.

There are a number of materials that can be used to enlarge the mentum. The most common are made from silicone and are placed under the skin of the chin over the bone through incisions in either the mouth or preferably under the chin. There are a number of  different styles of these implants: with clefts, with extended arms, etc. The surgery is performed under local anesthesia, and though it takes a short amount of time, the healing can take months due to swelling in the area. Numbness of the lip is one of the potential complications, as well as infection and movement of the implant.

This type of surgery is usually reserved for patients who not only have a cosmetically weak chin but also misaligned teeth and an incorrect bite. These surgeries are big surgeries requiring weeks of recuperation and are not usually performed for purely cosmetic reasons.

Of course, all you may need is a rhinoplasty—a nose job!